Simorgh Group on the Theater Stage of Mumbai 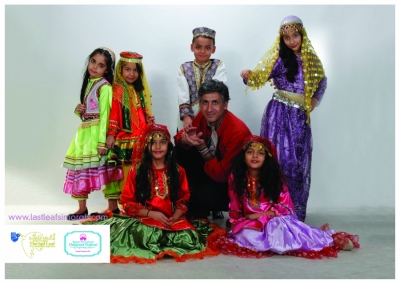 Simorgh Group on the Theater Stage of Mumbai
Simorgh Group will depart Tehran to India in the morning of January 5 to stage “The Last Leaf” show in Ryan International Children’s Festival of Performing Arts in Mumbai.
The Last Leaf deals with the consequences of the quarrels, domestic fights and international wars with a fantasy and fiction structure.
The show begins with childish clashes between the puppets and slowly enters the tragic world of humans that followed the destruction of the world. Finally by attending the peace bird everybody realizes his/her mistake and while the world is in the danger of destruction they try to make a beautiful world without violence.
Being non-verbal and having a universal theme are the most important features of The Last Leaf. With a different look and a fantastic language, it tries to stage the important issue of today world, which is war and fearing of war, in the sweet world of puppets. The difference of this performance with the past performance of this show is that the 8-year-old children are as its puppeteers and they will be Iranian peace messengers in Ryan International Festival. This show has different ending in different countries. Its successful performances in Sarajevo, Chennai and Bursa have been the powerful reflection of Iranian Theater in international arena. The participation of artists and children of host country are considered as other features of The Last Leaf. The writer and director of The Last Leaf is Mohammad Boroumand. Its other agents are as following: Puppets designing and construction: Monire Amiryousefi; Composers: Mahdi Kianmanesh and Yousef Nikpoor; Producer: Mohammad Javdani Irandoost; International Relations Manager and Translator: Maryam Khoshdel; Website Manager: Adel Tavakolinasab; Puppeteers: Amirali, Roshaan and Rozhin Shariati, Mehrsa Javdani Irandoost, Mehrava Afshani and Parmis Fallah; Scene Secretary: Eghlima Assadi; Stage Manager: Marzie Rashedi; Lightening Operator: Maryam Aboeerad; Sound Operator: Maryam Abbasi Pour; Poster Designer: Masoud Sabouhi.
Simorgh Art and Cultural Institute that is a non-profit NGO executes this project.
Ryan International Festival that is devoted to children’s art will be held with the slogan of “Peace and Friendship for All” from 7 to 10 January in Mumbai and groups from countries of India, Iran, Russia, Czech, Morocco, Estonia, Thailand, Sri Lanka, Finland, Bangladesh, Nepal, Zambia, Egypt, Iceland and Germany will perform their works in it.
More than ten thousand artists, mostly children and adolescents will perform in this festival. Simorgh Group will perform The Last Leaf for Indian audiences and festival other international artists in St. Andrews Auditorium Hall on Friday 18 January at 11:00 a.m.
Mohammad Boroumand, Simorgh Group Manager, said that I hope the day will come that the theater of children and adolescents is taken seriously in our country and Iran also joins the countries emphasizing the children have placed the production of art works by children and adolescents as the basis of their art activities. I hope the day will come that the children and adolescents can seriously and professionally stage their productions in the International Festivals of our country and specialized festivals are held in this field.

Read 1611 times
Tagged under
More in this category: « Simorgh will show its Last Leaf in Bursa- Turkey The success of Simorgh Theater Group in Ukraine International Theater Festival »