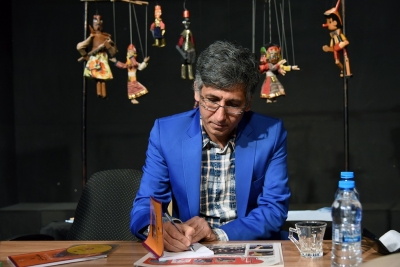 As Boroumand said, the first part of the festival will begin with reading 8 plays of Davood Kianian and Hamid Ghaleei. This program, untitled Saturdays of Reading will start from February 10, 2018 and will be continued until April 14, 2018. Pardis Theatre Mostaqel will welcome persons who are interested in this program every Saturday At 06pm. Other parts of the festival include performing theater by international groups, performing theater by Iranian groups, performing theater  by children and young adults of Mashhad, international play writing competition and puppet making and puppetry workshops.

Mohammad Boroumand added that since February 26, 2018 Simorgh Company will perform The Last Leaf and All my Friends in Pardis Theatre Mostaql.

This conference was ended by giving journalists the book of The Musician of Love, a book about Jigi Jigi's life.