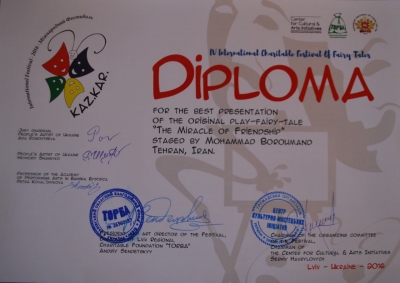 The Miracle of Friendship Show by Simorgh Theater Group, written and directed by Mohammad Boroumand, could achieve the First Place of Ukraine International Theater Festival, Kaz.Kar. The fourth edition of Ukraine International Theater Festival was held on June 11-14 in Lviv with focus on the fairy tale plays. There were artists from Iran, Czech Republic, Poland, Ukraine, Slovakia, Hungary, Italy, Scotland and Germany in this festival that was held in two parts of performing theater and reading tale. Ada Rogovtsev who is one the famous and well-known artists of Ukraine, was the Chairman Jury of this festival. She was born on 1937 and she has appeared in over 30 films and television shows since 1957. She won the award for Best Actress at the 7th Moscow International Film Festival for her role in Hail, Mary. The presence of Ada Rogovtseva having Shevchenko National Prize in Theater had given a special credit to Festival Jury. Some films of this actress are: Hail Mary, 1970; Taming of the Fire, 1972; Gadfly, 1980; Brothel Lights, 2011.

Read 1780 times
Tagged under
More in this category: « Simorgh Group on the Theater Stage of Mumbai The book and video of “The Musician of Love” were published and distributed »