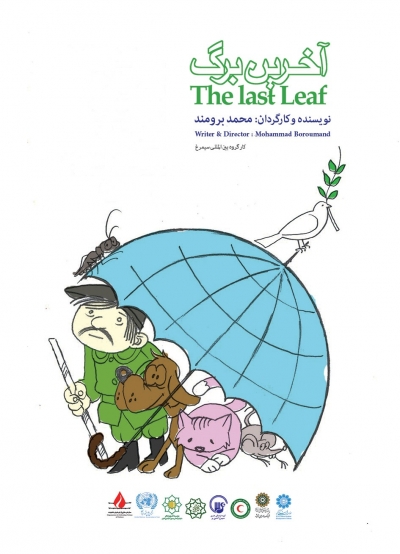 In order to promote the idea of the world without war, Simorgh Company decided to produce "The Last Leaf" show in 2014. This non-verbal puppet show tries to covey the importance of peace and friendship through quarrels and fights between its characters. Simorgh Company started "The Last Leaf" performance in Iran with international puppeteers such as Douglas Kester ( United States of America) , Kelsey Yuharra ( Canada), Jessica Sim ( United States of America) and Samiallah Ataei ( Afghanistan) and is keeping its international performances with two group of adults (Monti Mazinani, Sepide Nooraee, Shahla Maleki, Leila Soufi and Hajar Poorsina) and 8 years old children (Rozhin Shariati, Mehrava Afshani, Roshaan Shariati, Mehrsa Javdaniirandoost, Amirali Shariati and Parmis Fallah). With the adult group the show is performed by puppets and with children group it is performed by puppet and masks.  Its first international performance  started from Sarajevo Peace Festival with adult group( March 2015) . As everybody knows Bosnia and Herzegovina has recently suffered of a terrible domestic war and we are glad that our efforts for promoting the peace and friendship has started from there. The Last Leaf kept on its international performances by taking part in The Little Festival in Chennai (Southern India) by the performance of the children group(July 2015). It will be performed in 16th International Puppet and Shadow Theater Festival of Bursa (Turkey) with adult group on November 2015 and in 14th International Children's Festival of Performing Arts in Mumbai (India) with children group on January 2016. We hope that we can go all around the world with our message of peace and friendship for everyone and one day we reach a world without the war and fight.