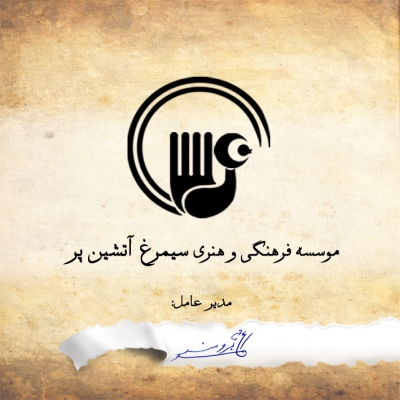 In 1995, Mohammad Boroumand and the talented youths who loved theater gathered together to perform theater for children and adolescents and this gathering formed Simorgh Theater Group.
There are three forms of membership in Simorgh Group: joined, sidekick and honorary. Joined members are those who have worked in more than five shows such as: Monire Amiryousefi,   Mahdi Kianmanesh, Saiede Aminzade, Majid Saneie, Fereshte Ebrahimi, Aazam Kheirtalab, Ata Rahmati, Amir Javdani Zarrin, Mahboube Padash, Mozhgan Amiryousefi, Elahe Akrami, Jamil Amel Sadeghi, Taghi Khodadade, Mahnaz Asghari, Hadis Azari, Adel Tavakolinasab, Samira Ozhdelnia, and Maryam Khoshdel. Sidekick members are those who are trained in Simorgh Group and play in at least one show and they are more than 100 people. Honorary members are the professors, as writer, director or composer, who have staged at least two shows accompanying Simorgh Group artists such as Hamid Ghaleie, Javad Rahimzade, Yousef Nikpour, Javad Samnezhad, etc.
Simorgh artists are of two age groups: a) adults; b) children & adolescents but the targeted audiences are mainly children and adolescents.
At the first year of Simorgh Group establishment when theater employees of public sector did not give him appropriate space for rehearsal, Boroumand continued the rehearsals in his father house and was forced to stage his first show named “Hello Dear Mother” in Hoveize Cinema Hall for one month.
Boroumand was the initiator and organizer of many first things in Iranian theater in 1995: the first theater photography competition by participation of all professional and amateur photographers of the city; the first children painting competition of a show that the selected works were available in the form of an exhibition for public visit and above all since there was no appropriate theater hall in Mashhad, Mohammad Boroumand, with his personal fund, founded the first theater private  hall in Iran named Khane Namayesh (Theater House).
After founding Khane Namayesh, Simorgh Group artists could easily rehearse and perform their works. Theater training and specialized classes were held in this place. An archive of Iranian and foreign Tele- theaters were formed, theater and drama specialized library was founded and now many of those who were trained in Simorgh Group are among the best performers, puppet makers and puppeteers of Iran.
During the years 1999-2002, Simorgh Group performed theater every day; mornings for children and evenings for public.
Many artists performed their works in Khane Namayesh and Boroumand offered it freely to city talented youths in order to provide the condition for the activity of all and following it many successful plays were staged such as Kakoli, M Like Magician, The Singer Bird, Baharak, A Day Not Like Everyday, The Magic Ball, Golnaz, The Old Song, Antigune, Laya, The Other Man, The Sun Land, Tick Tack Maryam, etc.
In 2000 Boroumand was introduced and appreciated by Theater National Committee not only as the founder of the first theater private hall in Iran but also as the most active theater artist.
The other theater private halls were founded in Tehran about ten years later the foundation of Khane Namayesh.
“Fire Station got on fire” was the title of the newspapers in 2002. It was because that Mohammad Boroumand with 60 players having been trained in Khane Namayesh staged “The Event in Event” in the old building of Fire Station. The Event in Event had more than 50 thousands audiences during 10 night performances.
All Simorgh shows have been performed more than 100 times. This group has performed its shows in Iranian different cities as well as international festivals. Free performances for orphan and poor children is one of this group programs. Achieving different national and international awards are other glories of Simorgh Group.
Following are some of shows having performed by this group:
Hello Dear Mother, The Legend, The Singer Bird, Nani & Nini, The Sun Men, From the Raine Tribe, The Angle of Rain, The World Knaves, All my Friends, Jigi Jigi Nanekhanum, The Event in Event, The Miracle of Friendship, The Last Leaf, etc.
During Bam earthquake (in 2003 that more than 30000 people were killed)Simorgh Group accompanying UNISEF performed theater for Bam injured children and donated the all sales of Golnaz tickets to Bam children.
In 2014 when the most countries of the world have boycotted Iran and while the war has been intensified in Middle East, for the first time in Iran, Boroumand invited two American players, Kelsey Yuhara and Douglas Kester, and Canadian player Jessica Sim to Iran and staged The Last Leaf whose theme is about peace and friendship for all, in Tehran, Mashhad and Iranian war zones accompanying Simorgh Group Artists and Afghan player Samiollah Ataie. He did it with his personal fund and without any donation from Government. Then he staged it in the international festivals in Sarajevo, Chennai, bursa and Mumbai. The result of Simorgh Group efforts is performing more than 20 shows, 3 Tele-theaters, 2 puppet series and some documentary films.
In order to spread its activities, now this group has been changed to Simorgh Atashin Par Cultural & Art Institute and does all cultural and art activities related to children and adolescents age group.
Performing theater in Bosnia and Herzegovina, India, Turkey and Ukraine, producing movie, publishing book and producing animation for children are among this group recent activities.

Read 10809 times
Tagged under
More in this category: The Last Leaf »